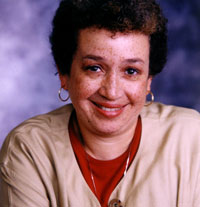 Lillian E. Benson’s professional body of work as a television, video and feature film editor spans almost thirty years. In 1990 the native New Yorker was nominated for an Emmy for her work on the acclaimed civil rights series “Eyes On the Prize II”. She contributed to films that have garnered five Emmy nominations, four Peabody Awards, and numerous other honors. Recent films she edited include the documentary “Get In The Way- The Journey of John Lewis” and the narrative short “Progress” part of the HBO Access series.

In 2004 Benson made her directorial debut with “All Our Sons-Fallen Heroes of 9/11”, a half-hour documentary about the firefighters of color who died at the World Trade Center, broadcast nationally on PBS. She just completed “AMEN- The Life and Music of Jester Hairston” an educational film about the internationally-known choral arranger.

Benson is a member of American Cinema Editors, an honorary editing society, and serves on their board of directors. She is also a member of the Academy of Television Arts and Sciences and the International Documentary Association.